Designing a PCB1 and sending it off to fab is surprisingly accessible and feels like a super power. I’d been intimidated for years, but finally jumped in. Also, I love living in the future! For <$20, you can design a PCB, have it manufactured in a factory, and get it mailed to you. This still seems insane to me.

This post describes the path I took to get my first PCB manufactured, with an emphasis on not getting sucked into optimizing every decision. I’m assuming you already have a circuit drawn out or breadboarded2, and you want to immortalize it.

I estimate that going from “what is KiCAD even” to ordering your first PCB could be a reasonable one-day project for a simple circuit you already have sketched or breadboarded. It only took me a few days because I was paying a lot of attention to the aesthetics of the board.

While doing a mini batch at the Recurse Center, I became fascinated by the oscillator circuit3 that powered the RC Christmas ornaments. I love how simple the circuit is, while generating visually-interesting behavior! 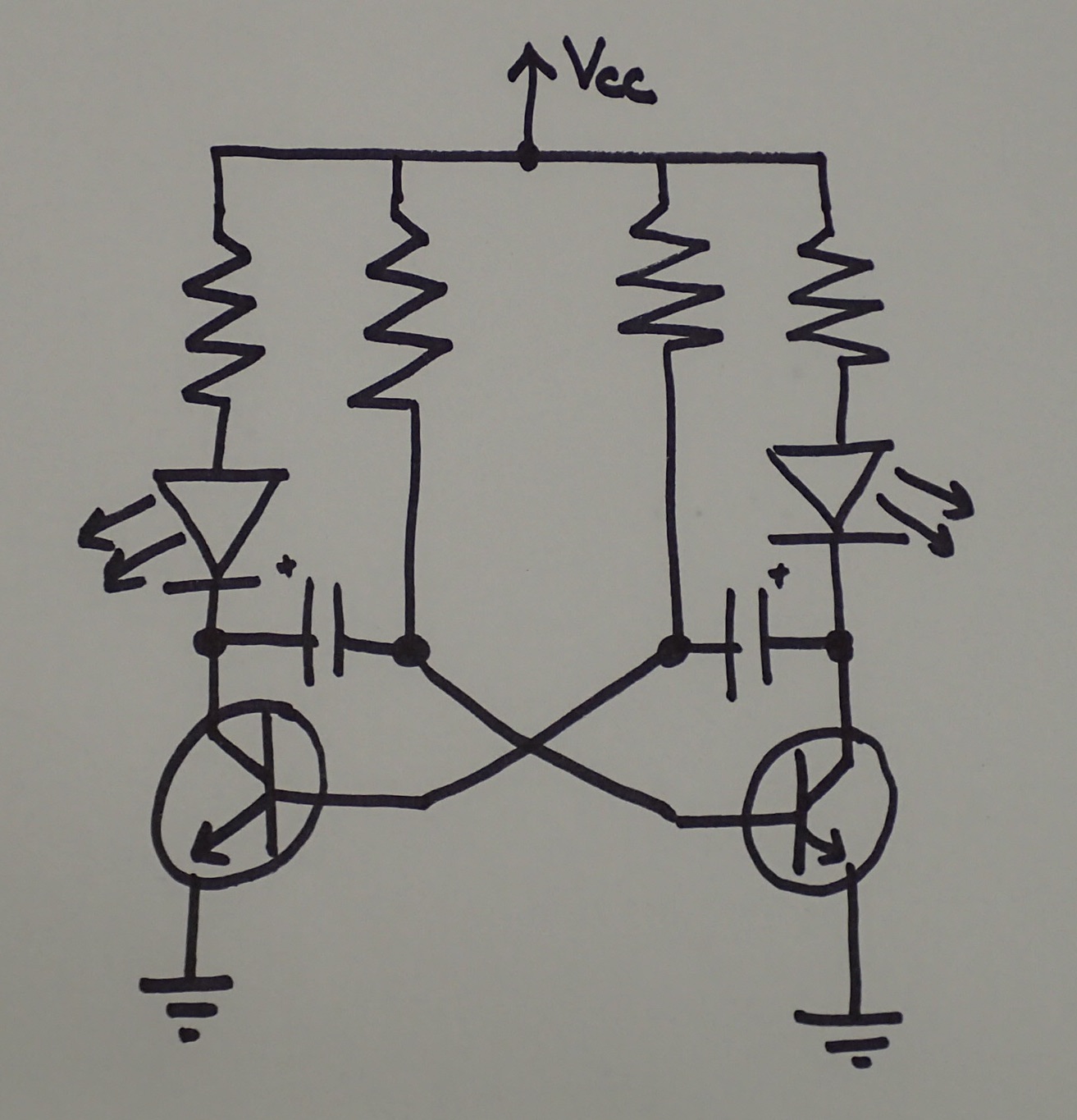 I wanted to play with varying the frequency of the oscillator by using different values of resistors and capacitors, so I made a protoboard wired up with female header to make this easy. It turns out that LED color also makes a difference! I dislike breadboarding for anything more extended than a proof-of-concept (it is the physical incarnation of spaghetti code) and protoboard4 can be a pain to work with. So, I figured an oscillator circuit with female headers for all of the components could be a fun first PCB to have fabricated. 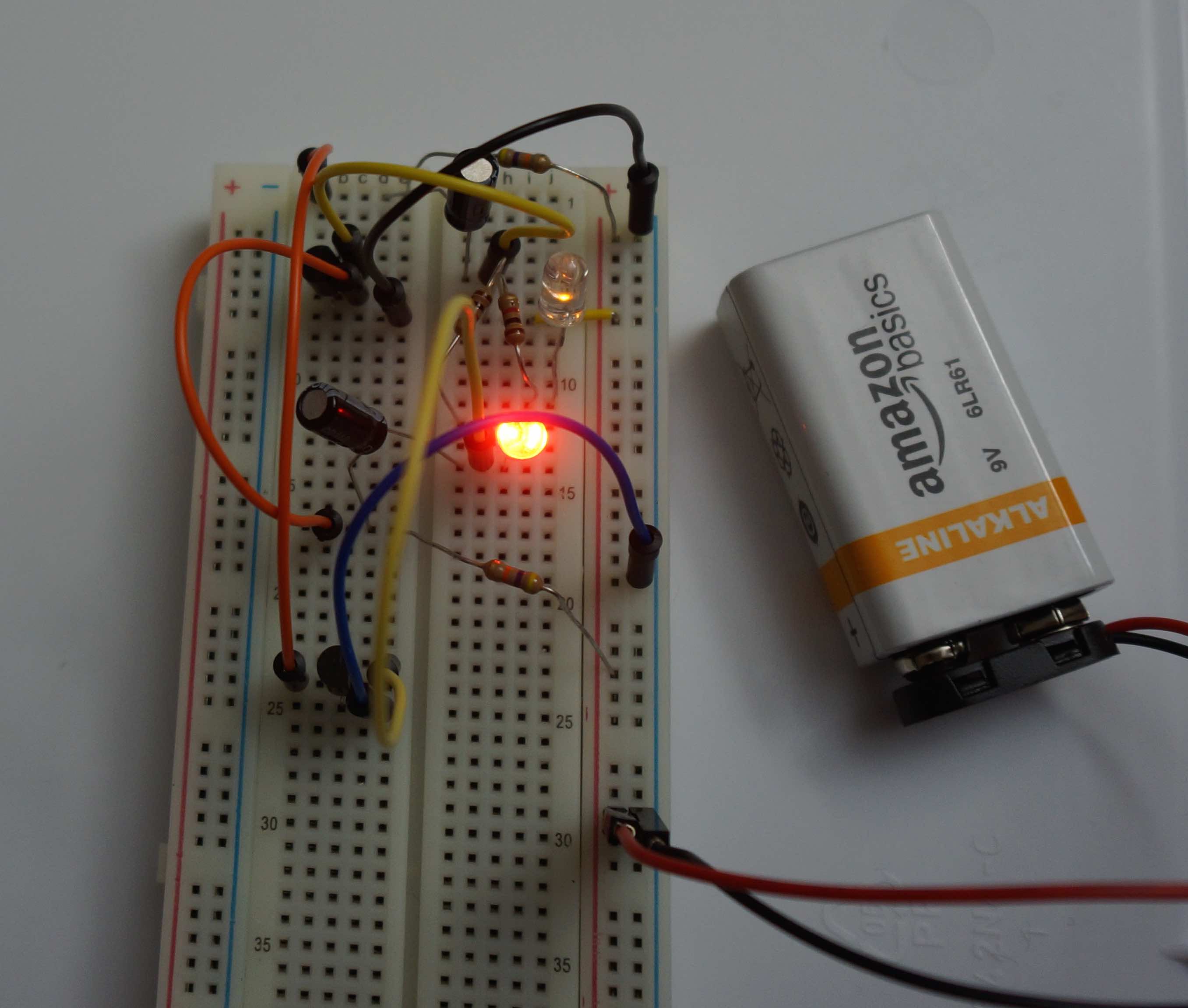 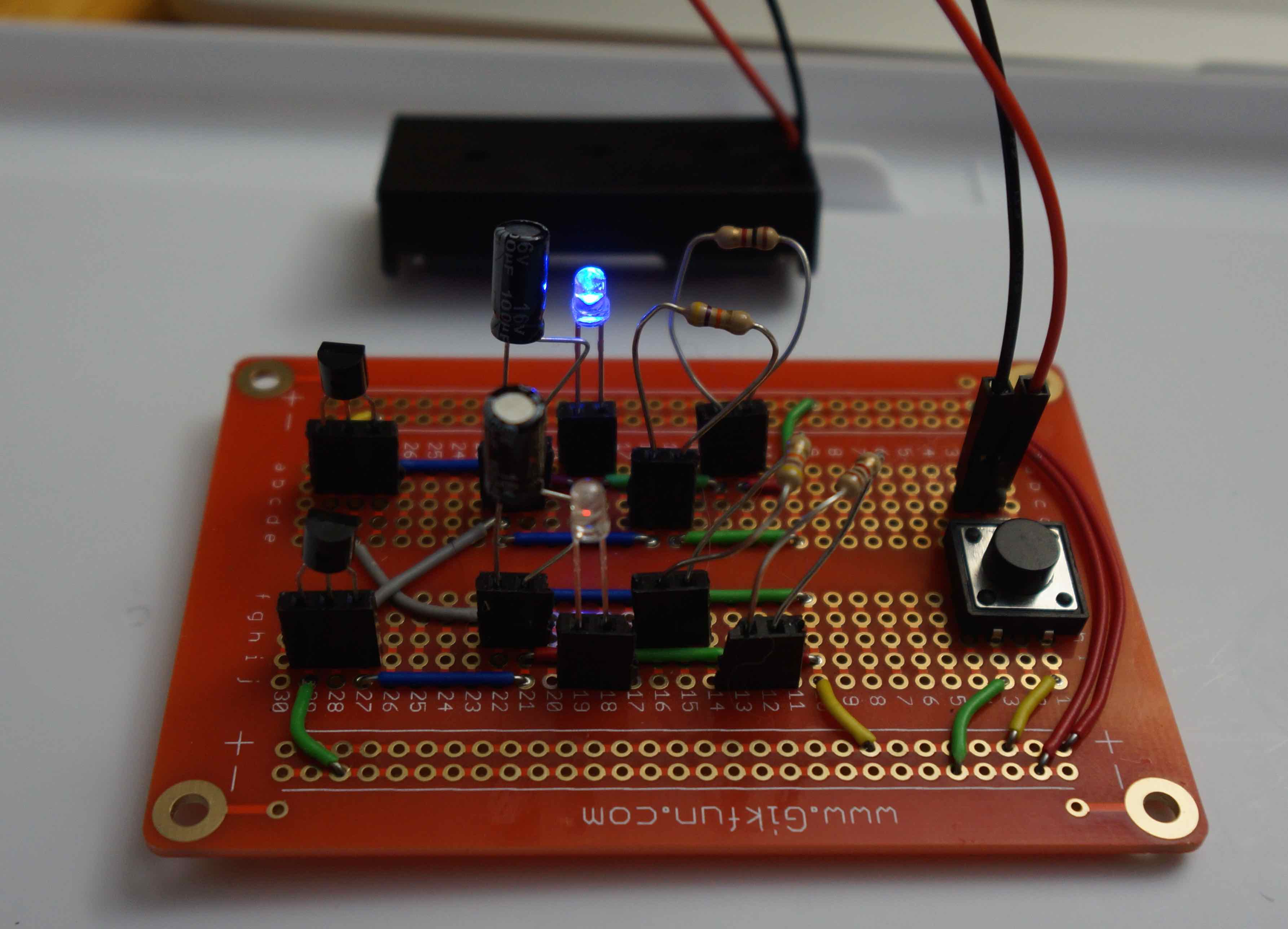 Early implementations of the oscillator. Left: on breadboard, Right: on protoboard.

I really like KiCAD5 as a design tool because it decouples documenting the circuit logically from laying it out on a board. This is great for when I want to have professional-ish schematics of things that I’m only ever going to implement in protoboard. I think Eagle is the main competitor, but it has a tight coupling between the logical schematic and the physical layout that forced me to care about component packaging and footprints way too early (like 2 years too early), so I bailed on it quickly.

Plus, KiCAD is open-source, which makes me happy.

There are 3 primary phases to designing a PCB in KiCAD:

This video tutorial by Widsor Schmidt was well done. He walks you through the whole process (opening KiCAD for the first time to finished PCB layout) in 20 minutes. I watched it repeatedly on 2x speed, pausing so I could follow along.

I don’t remember what tutorials I used for learning how to set up a schematic using KiCAD’s EESCHEMA program, but Schmidt’s video also covers that. I first used it a few years ago, and recall that I spent an evening to go from “KiCAD seems interesting” to “hand-sketched emergency stop schematic for my robot is now laid out nicely”. Here’s my oscillator circuit as represented in EESCHEMA: 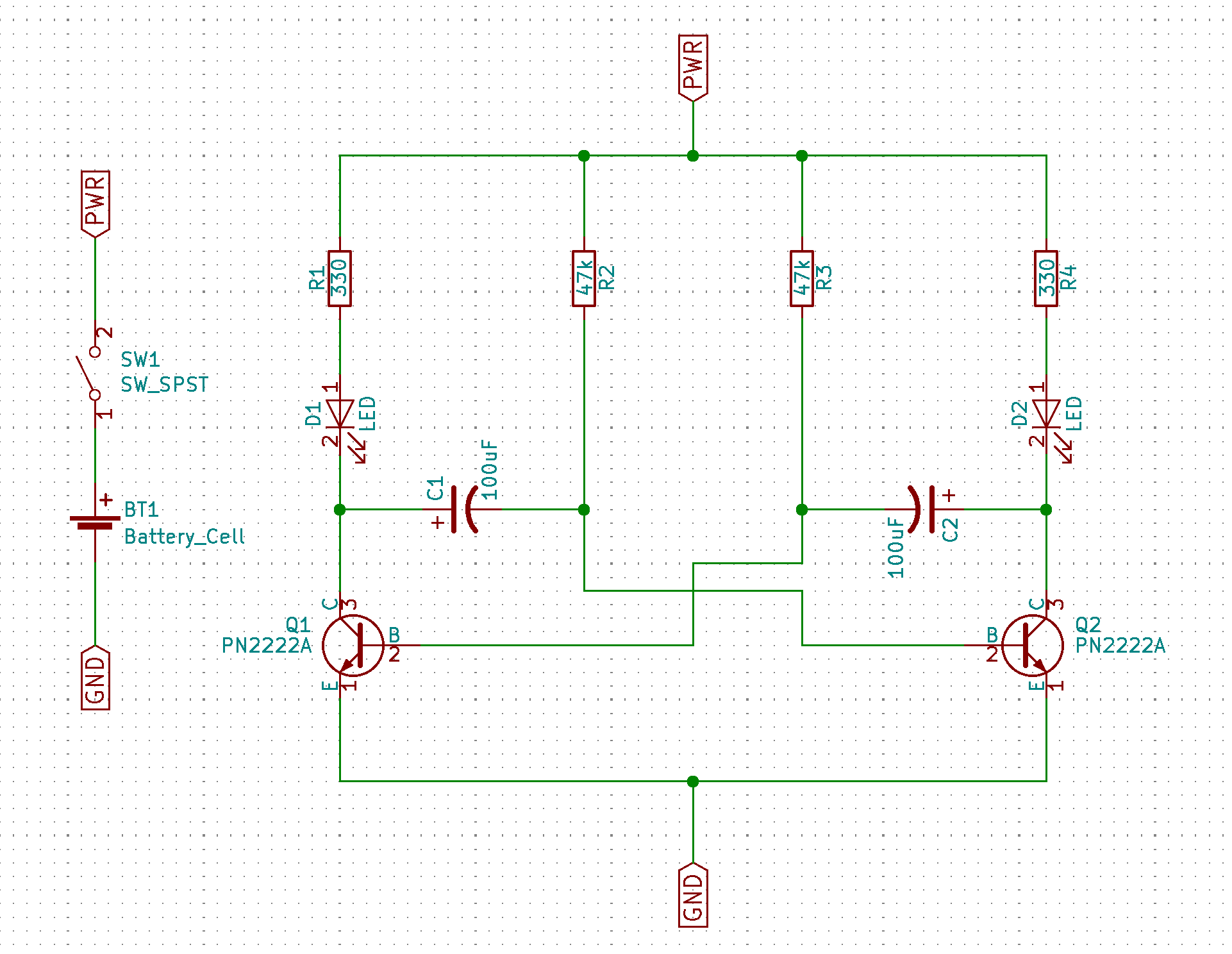 Next, we need to associate the symbols on the schematic with a real-world component that matches the required specs. This requires both picking the actual components you’ll use during assembly and specifying the footprint they need on the board.

If you want to use components that aren’t in one of KiCAD’s built-in libraries, you can make your own footprint. I’ll have to learn this eventually, but since my plan was to solder female headers to the board so I could swap components out, this was irrelevant. To save time on your first board, you can just use through-hole components with bendable leads (which you probably already have from breadboarding!) or footprints that are already in the libraries. If you’re desperate/lazy, just use the footprints from the connector library -- they’ll work for anything that you were able to use on a 0.1” pitch breadboard!

The exceptions to this are the power switch and battery, both of which took me a long time to find and aren’t part of a typical breadboarding kit. I passionately hate Digikey’s search interface. It is shockingly bad at having the right metadata for filtering to be effective. Mouser is sometimes better, but I'm still not a fan. So, here are some good-enough options:

If you want to scale down components to make the final board smaller, you’ll have to spend time shopping ... and scaling down in size also means figuring out how to do surface-mount soldering with tiny components. I may get to that someday, but not yet.

The next step was to lay out my circuit as it would appear on a PCB.

I fiddled with the layout a lot (entirely redoing it 3x), and had lots of drudgery figuring out how to get the silkscreening to look almost right. I still don’t have a process that I love for that ... I imported public domain electrical symbols as bitmaps, but it was hard to get their leads to have the exact same width to match.

Here's the representation of my board from pcbnew, showing all of the layers at once: 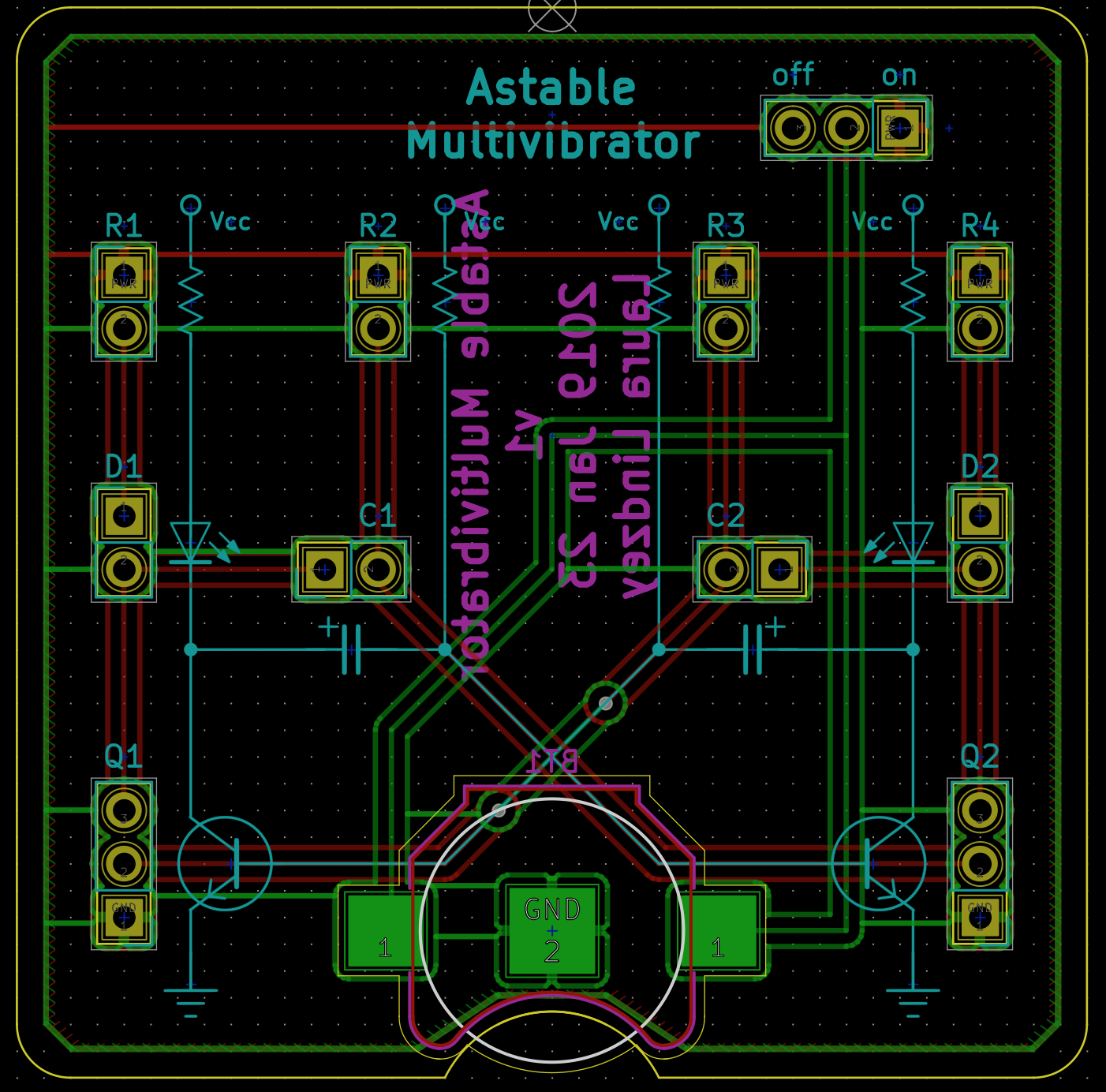 I don’t remember when/how I came up with the idea for making the circuit diagram part of the PCB design, but I suspect it was influenced by having seen Star Simpson’s Circuit Classics6 at some point.

Once you’re happy with the circuit layout, head over to OSHPark and upload your kicad_pcb file. Their interface is fantastic, and provides a nice rendering for you to do a final check on each layer, in addition to what the whole stackup will look like when manufactured: 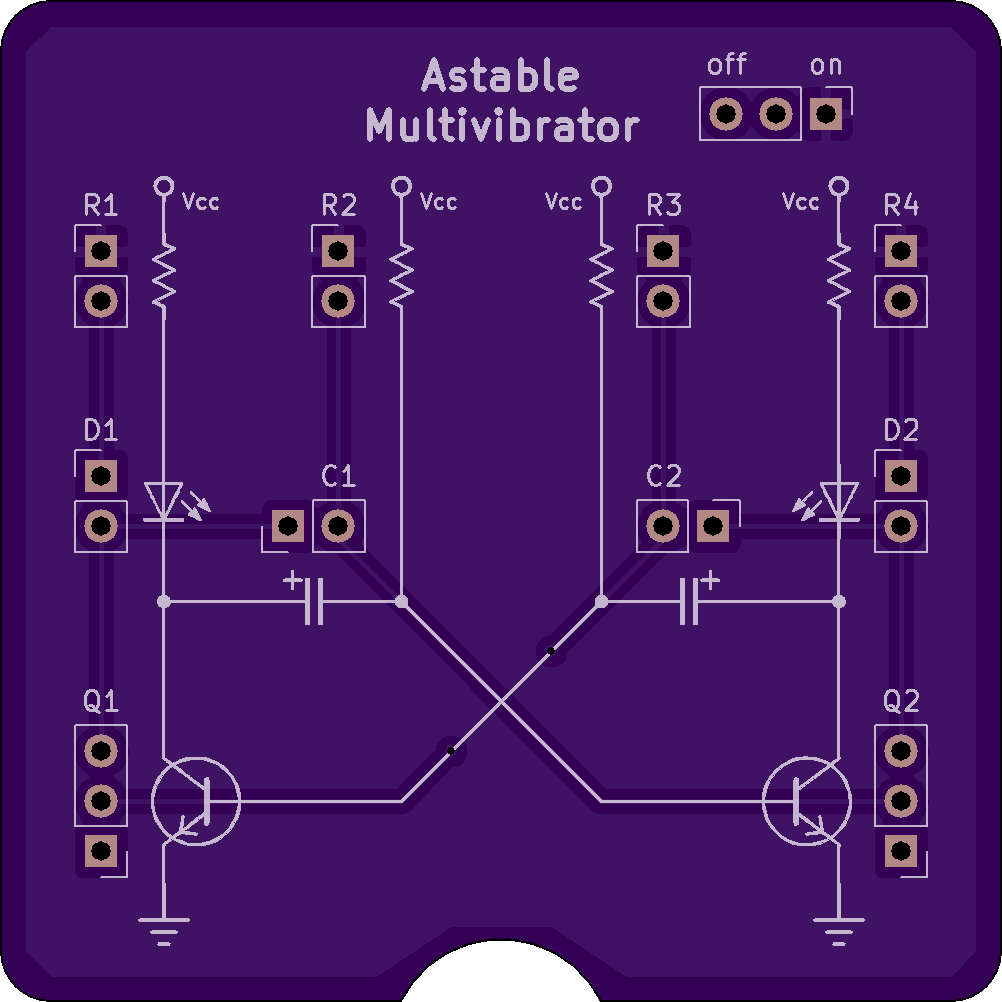 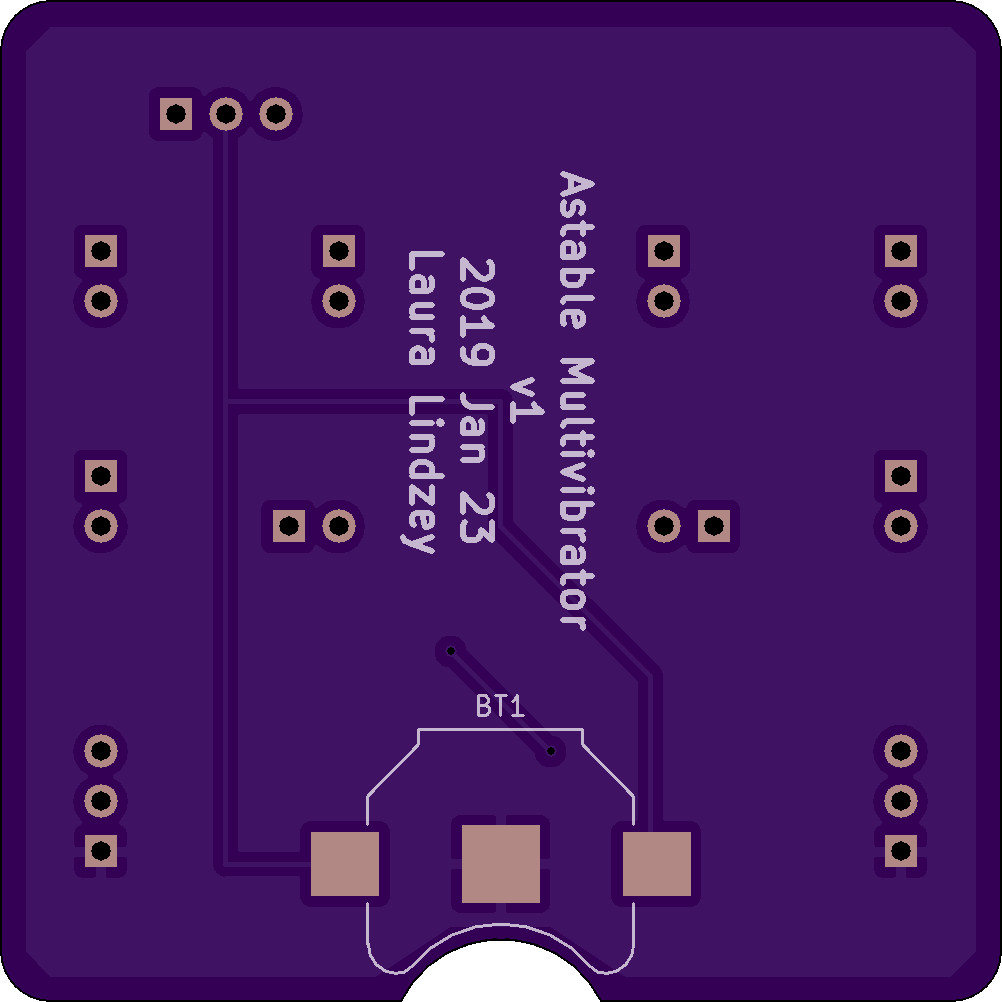 Renderings of the front (left) and back (right) of my PCB, generated by OSHPark.

I didn't spec out the full market of available fabricators because OSHPark hit a sweet spot for me at the intersection of "cheap enough to do on a whim" and "caters to hobbyists/small batches, plays exceedingly well with KiCAD”, with a bonus of “the EE at work uses them for custom boards for our several million dollar robot, so quality must be OK”. Seriously, actually placing the order was the easiest part of this whole process. Their automatic import (straight from KiCAD’s .kicad_pcb format) automagically worked.

My first version of the layout was going to cost $7.85 to get 3 copies of the board. I made it bigger for aesthetic reasons, so I wound up spending $20.05, and shipping is free.

OSHPark did a great job, and they’re prettier than I expected!

I assembled two out of the three -- one with header7 so I can swap in and out different components, and one with blue LEDs tuned to flash at about 1 Hz. 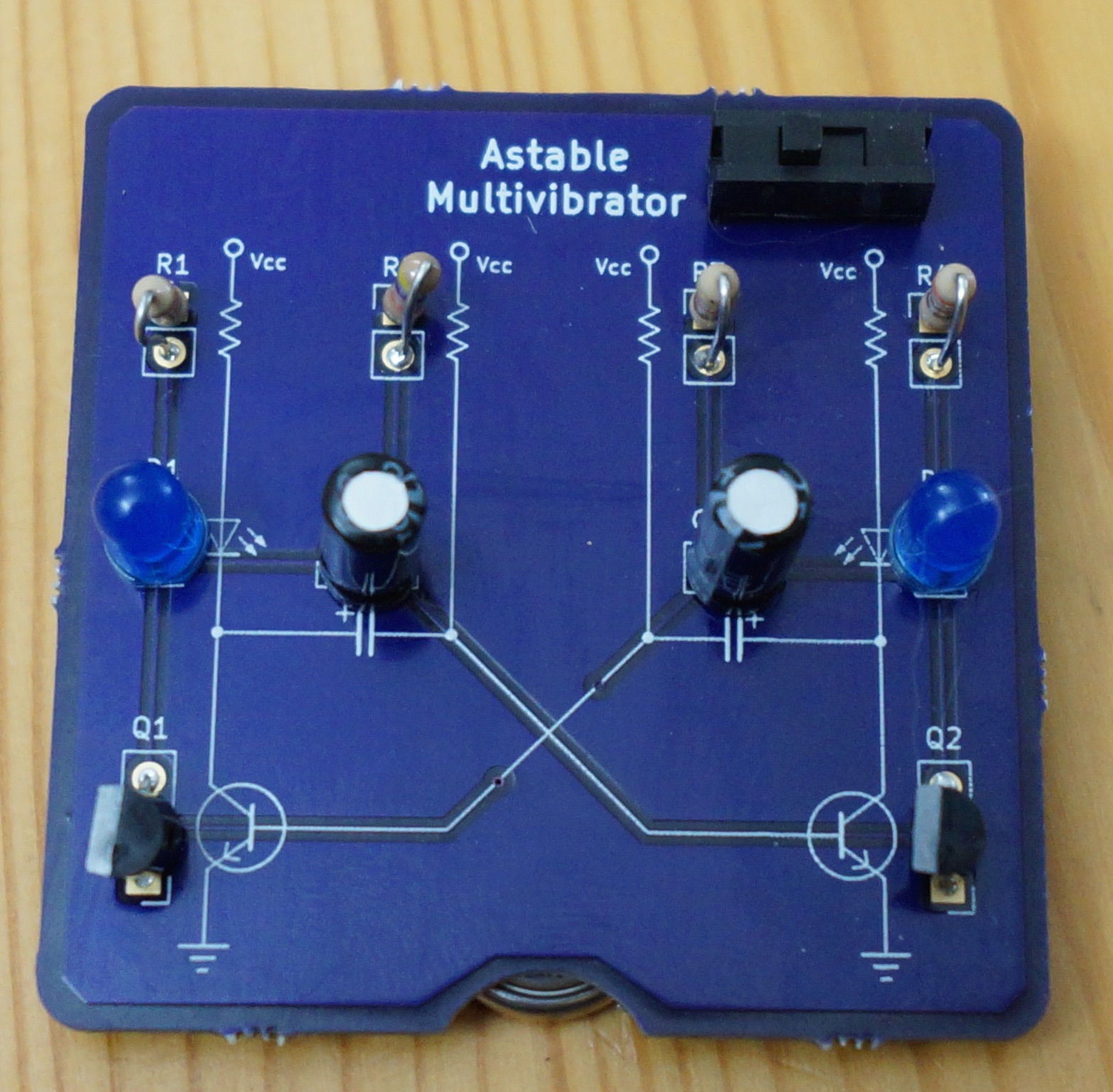 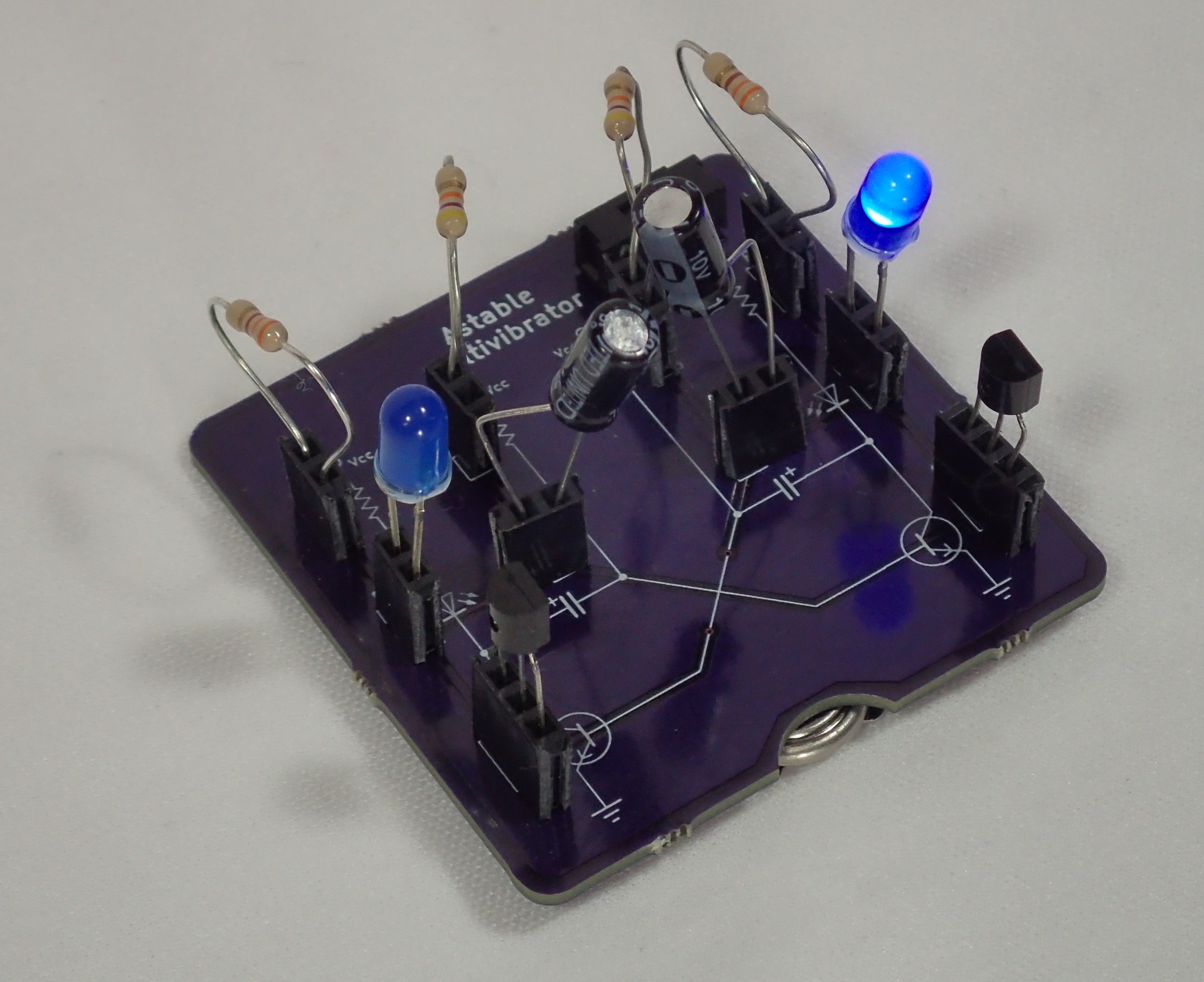 The rough bits around the edges are mousebites, which are added by OSHPark in order to attach my board to others during the fabrication process. Afterwards, the thin tabs break easily, separating the boards. I don’t really want to sand fiberglass, so I may try covering them with clear nail polish.

There are a few issues that I'd fix in a v2:

However, I’m pretty happy with this! While I still have lots to learn, the workflow seems solid. My next step will be figuring out how to add my own footprints so I can use any component I want.

Acknowledgements: Huge thanks to the community at RC for inspiring both the project and the writeup! Aaron Strick & Noah Zachary Gordon provided the original inspiration and encouragement to post this. Veronica Hanus & Robert Schuessler commented on an earlier draft.